Only a few hours after polls closed on Tuesday, fraudsters started using the uncertainty over the winner of the U.S. presidential election to send out spam messages that are designed to infect devices with the Qbot banking Trojan, according to Malwarebytes.

In this campaign, the fraudsters are hijacking email threads and using them to send spam or phishing emails that have an election theme as part of a social-engineering ploy. In many cases, the messages come with an attached zip file labeled "ElectionInterference" as a way to entice a target to open the document, according to Jerome Segura and Hossein Jazi, threat researchers with Malwarebytes.

"While the election results are still being evaluated and debated, victims are enticed to open up the document to read about alleged election interference," the two researchers note in their report.

The zip file contains a malicious Excel spreadsheet designed to look like a secure DocuSign file. If the macros are enabled, the document will then download a payload - the Qbot Trojan, according to the report.

QBot, or QakBot, is a well-known banking Trojan that has been circulating since at least 2008. In a report released in August, Check Point Research found the operators of this malware have recently changed its coding to allow it to hijack Microsoft Outlook email threads to spread additional malicious messages (see: Qbot Banking Trojan Now Hijacks Outlook Email Threads ).

The banking Trojan also can steal device information, passwords, emails and credit card details; act as a dropper to help install other malware, including ransomware, within an infected device; and connect to the victim's device to conduct banking transactions, according to the report.

In previous campaigns, Qbot has targeted the customers of several large financial institutions, including JPMorgan Chase, Citibank, Bank of America, Citizens, Capital One and Wells Fargo, according to security researchers with F5 Labs.

The Malwarebytes report notes that fraudsters wasted little time in recrafting phishing emails and spam to take advantage of the uncertainty that followed the presidential election on Tuesday and which remains undecided as of Thursday. 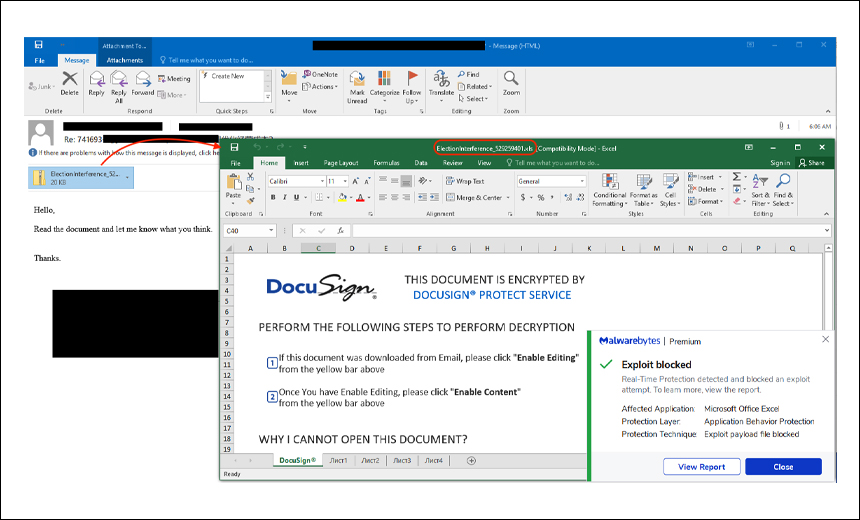 The Malwarebytes team notes that once the Qbot Trojan infects a compromised device and connects to its command-and-control server, the malware will begin harvesting emails from that device and turn those into spam that could eventually target other victims with election-themed messages, according to the report.

And while Tuesday's election passed without a major cyber incident, officials are still warning to be on the lookout for misinformation, as well as phishing campaigns and other frauds, which could materialize in the coming days as votes are tallied (see: Post-Election Day: US on Guard for Hacking, Misinformation).

While the Malwarebytes researchers found the operators of Qbot using the presidential election to spread the banking Trojan, other researchers have noted the malware is also delivered through the Emotet botnet, which has been active since July (see: Emotet Attacks Continue to Soar as Botnet Spreads Globally).