What are four holes in your skull and a few thousand neurons between friends?

The news that serial entrepreneur Elon Musk and scientists have unveiled Neuralink Corp. - a neuroscience startup that's been in stealth mode for two years and aims to create a new computer/brain interface - might make you ask: What took him so long?

"It's not like suddenly Neuralink will have this neural lace and take over people's brain."

Indeed, after inventing PayPal's progenitor and the Tesla electric car, not to mention the SpaceX Falcon rocket and Hyperloop rail replacement service, your natural reaction might be: Of course Elon now wants to hack my brain.

Neuralink is preparing a submission to the U.S. Food and Drug Administration that would allow it to test a "brain-machine interface" with therapeutic applications, such as treating brain diseases and controlling prosthetic devices or computers. So far the company has tested its system on rats and monkeys, but not humans.

"We hope we're less than a year from the first safety study on the order of five patients," Neuralink President Max Hodak tells the Wall Street Journal.

Don't expect the technology to reach market anytime soon. "The road is long," he says.

Brains being connected to computers isn't new - at least in science fiction. On "Star Trek," First Officer Spock's brain ended up in a vat in a nadir episode from 1968.

William Gibson's 1984 novel "Neuromancer" posited a world in which individuals could strap non-invasive "dermatrodes" onto their forehead and enter a fully immersive, virtual reality.

Meanwhile, humans plugged into the virtual reality known as the Matrix in the eponymously named 1999 film via a 'head jack' in the back of their skull. Among the many philosophies the film riffs on is Oxford philosopher and futurologist Nick Bostrom's "simulation argument," which posits that we may already be living in a simulation but just not know it.

Musk, who appears to be a Bostrom aficionado, says he's also been inspired by Scottish science fiction author Ian M. Banks' Culture novels, which describe a "neural lace" that gets implanted around an individual's brain when they're young and grows with them, enabling them to interact with computers via their thoughts.

But Musk has attempted to downplay any suggestion that hot-wiring brains to computers could result in one's personality being seized by an artificial intelligence singularity or its lesser cousin, Windows Update.

"It's not like suddenly Neuralink will have this neural lace and take over people's brain," Musk tells the Wall Street Journal.

Neuralink describes its system as using a "minimally invasive" surgical robot - think high-tech sewing machine - to rapidly place "thin, flexible multi-electrode polymer probes" composed of 96 polymer threads, each thread with 32 electrodes - for a total of 3,072 electrodes - in different parts of the brain, in a manner that avoids damaging the vasculature. 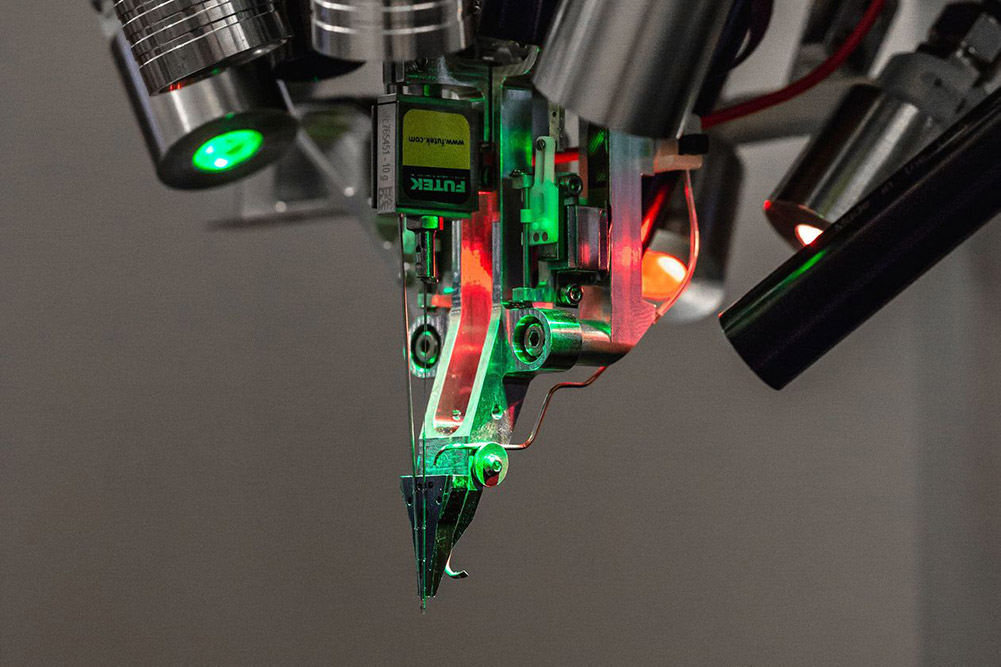 Neuralink's probe uses a "minimally invasive" robot - functioning like a sewing machine - to place thousands of tiny probes into a brain. (Photo: Neuralink)

But the approach faces many potential challenges. For starters, the brain has a habit of rejecting foreign matter, and it's not clear how biocompatible these probes might be, as Neuralink has noted in a research paper.

Some brain scientists have said that for a procedure that's as invasive as this one, they'd want it to last for at least five years, for example.

Neuralink's approach would also have to be scaled up for humans. So far, Neuralink has achieved "simultaneous broadband recording from over 3,000 inserted electrodes in a freely moving rat," saying that the surgical process took about 45 minutes, and that communications between the probes and Neuralink's chip can be handled by the throughput afforded by a USB-C cable. But it notes that a bigger brain would require using multiple devices and a larger architecture, although it says its existing setup should be able to scale up easily and that better surgical robotics "could allow us to accomplish this without dramatically increasing surgery time."

Efforts to expand neurotechnology for clinical and non-clinical offerings are not new. In 2013, the Obama administration launched the U.S. Brain Initiative to better understand brain function and find new ways to treat, cure and even prevent brain disorders.

An academic and government partnership called BrainGate has tested implanting micro-electrodes in people's brains and has reported that it's "allowed people with spinal cord injury, brainstem stroke, and ALS [motor neurone disease] to control a computer cursor simply by thinking about the movement of their own paralyzed hand and arm."

Meanwhile, companies including Facebook, CTRL-Labs, Kernel and Paradromics are all developing non-invasive implants to read and write to brains.

But do we want startups and tech billionaires monkeying with our brains?

One doesn't need to turn to best-selling science fiction authors to think up myriad dystopian consequences. But with so many - including Scotland-based Charles Stross - weighing in, it would do them a disservice to ignore their perspective on all the ways this could go horribly wrong.

Any one of these is a big problem. All three of them in combination? That's a hard nope, at least until there's a roadmap to a solution or a REALLY pressing need. https://t.co/mJRz8tv1MA

Anything involving your doctor having to tell you to "pay two bitcoins and call me in the morning" would obviously be a downer.

On the other hand, there's a reason why science fiction authors - not to mention anyone concerned with brain problems or spinal damage - have dreamed of days in which computers could be used to augment or bypass our brains - for example, to help paraplegic individuals walk again.

Some scientists are also voicing cautious optimism about Neuralink's approach. Leigh Hochberg, a Brown University professor and one of the heads of the BrainGate team, tells Scientific American that the Neuralink system is "a novel and exciting" approach.

"Given the great potential that intracortical brain-computer interfaces have to restore neurologic function for people with spinal cord injury, stroke, ALS, traumatic brain injury, or other diseases or injuries of the nervous system, I'm excited to see how [Neuralink will] be translating [its] system toward initial clinical studies," says Hochberg, who's a neurologist at Massachusetts General Hospital and the Providence VA Medical Center.

If scientists can create a system with these benefits and without current computer drawbacks - cybersecurity shortcomings among them - this could turn out to be not only a revolutionary but also safe therapeutic approach. At which point, for many, it becomes a no-brainer.